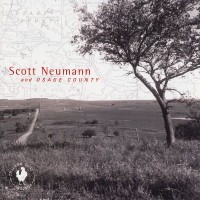 In his career thus far, Scott Neumann has played drums with a wide variety of artists including Woody Herman’s orchestra, Jack McDuff, Joshua Redman, Maria Schneider’s orchestra and rock, blues and jam band groups. His earliest interest was in rock and fusion, an area of music that he returns to on Scott Neumann and Osage County. With the excellent soprano-saxophonist Sam Newsome often functioning as the lead voice, Neumann’s quartet (which has one guest appearance apiece from guitarist Tony Scherr and percussionist Memo Acevedo) is at times a little reminiscent of Weather Report, though keyboardist David Berkman does not closely emulate Joe Zawinul. The funky grooves avoid being predictable, some of the originals are tricky to play (such as the 15/4 “Meserole”) and yet the set as a whole, even at its most introspective, is accessible. Some of the optimism and enormous potential of early-’70s fusion is felt throughout Osage County. The close attention paid to mood and groove variations, the high musicianship, the colorful ensembles and the strong solos make this a very successful effort.
by Scott Yanow, All Music.Com, Rating 4 Stars

On Osage County, Scott Neumann’s quartet plays with a hip and unique groove. Neumann on drums lays down solid funk beats while David Berkman and Don Falzone on keyboards and electric bass respectively keep the band moving forward with exciting comping and propelling bass lines. Sam Newsome’s soprano sax adds a great a sound to put on the top of the superb rhythm section.

Scott Neumann’s playing is both energetic and inspiring. He mixes it up with a variety of beats, making his playing very compelling. His drum playing provides the foundation for the killer groove produced by the band. His playing is very musical, always propelling or taking the band in intriguing directions. Osage County also displays Neumann’s gifted ability to compose. He wrote six out of the eight tunes on the album, all of which have funky, head-banging grooves and melodies.

The rest of the band plays well together and really compliments Neumann’s foundation. David Berkman’s keyboard playing provides the perfect comping style for this funk music. His solos are exceptional, using the different sounds of Fender Rhodes and Wurlitzer organ. Don Falzone on electric bass helps the band move forward by laying down solid bass lines. The soprano playing of Sam Newsome fits well over the top of the band. He usually does not play a lot of notes but he plays very melodically and he has a good sound.

Osage County is a great CD. They band plays well together and always plays with a high energy level.
by Andrew Johnstone, Jazz Review.Com, Rating 5 Stars

Sam Newsome (Soprano Saxophone) has recorded over seven albums as a leader. Sam’s artistry can be heard on Columbia, Sony, Palmetto, Criss Cross, SteepleChase and Satchmo labels. Sam’s recordings have placed in the Top 10 of both Billboard and The NY Times “Records of the Year” category. Sam has recorded/ toured with Donald Byrd, Charlie Hunter, Terrence Blanchard, Jean Michel Pilc and Donald Brown.

Don Falzone (Fender Electric Bass) has toured/ performed with Tom Waits, John Zorn, Jewell, Marc Ribot, k.d. Lang, Marianne Faithful and Leni Stern. Don can be heard on motion soundtracks such as “Primary Colors” with Ry Cooder, “Fire Walk With Me” with David Lynch and “Until the End Of The World” with Julie Cruise.